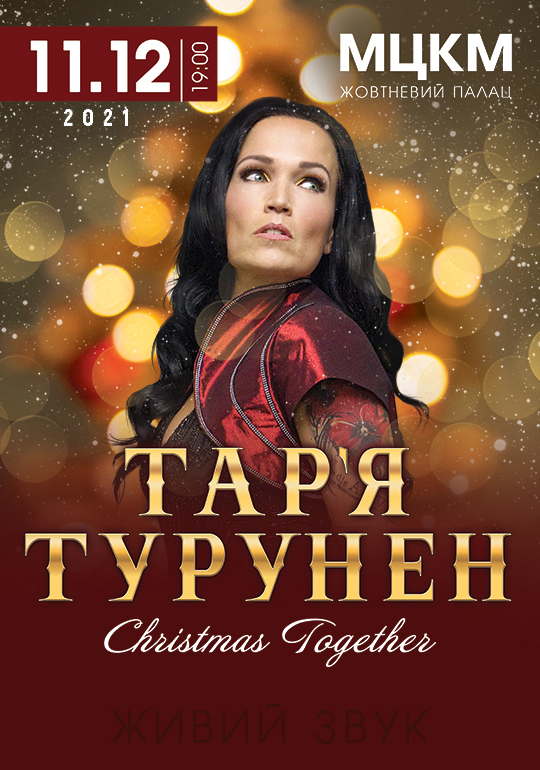 International center of culture and arts

Tarja Turunen with an exclusive Christmas concert in Kiev! Only one day!

The queen of metal – the Finnish Primadonna and one of the most famous rock divas in the world – Tarja Turunen invites you to her special, Christmas concert on December 11, which will take place in the October Palace. The ex-soloist of the band Nightwish promises that this visit will give her audience not just a holiday concert, but the true atmosphere of European Christmas.

This will be the warmest Christmas of your life. No matter how changeable the time may seem to us, Turunen’s music is a medicine, an elixir of warmth and goodness that we all need so much.

For more than a decade, Turunen’s fans have been coming from all over the world to attend her holiday concerts in different countries in December. This year, Kyiv will be added to the artist’s schedule.

“When I was little, our whole family got together and sang Christmas songs. This is probably why the Christmas tour has become for me a bit of a tradition” says the singer.

Accompanied by a piano, cello and guitar, Tarja will perform traditional Finnish and world famous Christmas songs with her unique soprano in three octaves, and she will also enjoy hits from past and new albums.

Every visit of Tarja Turunen to Kiev is always a full house and event! There is no doubt – the singer will pleasantly surprise us this time.

Tarja does not like praises to her, but she really has something to be proud of. Judge for yourself! It combines everything: original beauty, charisma and powerful, rich vocals, which are possessed by a few. At 42, she is one of the five best academic vocalists in the world! The British magazine “The Sun” named her one of the 50 women who during life became immortal due to their contribution to music.

Together with Scorpions, Tarja recorded the song “The good die young”, which graced the last album of the legendary band – “Sting in the tale”. There are 7 solo records in her creative luggage (she released her latest album “In The Raw” at the end of last year).

Turunen became the first foreign singer who managed to sell more than 20,000 copies of the album in the CIS countries. Her record “My Winter Storm” climbed 11th on the Billboard’s Top 100 European Albums, and Tarja herself was nominated for the “Echo Awards” and “Emma Awards”. Just imagine, in total over 900,000 copies of Tarja’s solo discs and more than 3 million copies of albums recorded as a part of “Nightwish” have been sold in the world.

Tarja Turunen is not an artificially created production project. She is a living legend with a worldwide reputation. And getting to her concert is a great success.

We are waiting for you on December 11 in the October Palace at a concert of the unique Tarja Turunen!