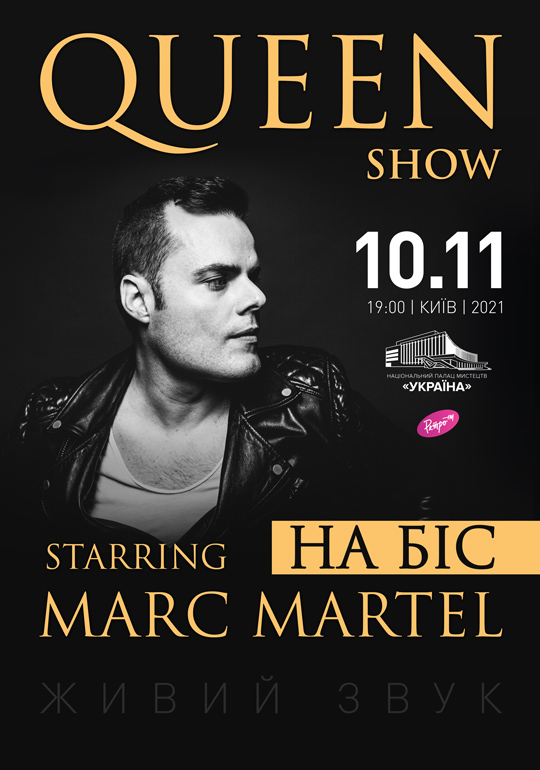 Queen Show and Mark Martel are back in Kiev. Just one day! Special concert!

You threw us messages and asked to repeat very much. As well we have been negotiating for almost a year so that you can again feel the overwhelming drive from emotions at the concert of Queen Show and Mark Martel. And now the time “CH” has come! We are pleased to announce that, at your many requests, Queen Show and Mark Martel are back in Kiev with an encore program!

Do everything you can in order not to miss the event of your dreams this time! It will not be just a concert, but a magic pill – a miraculous remedy that heals, renews and charges!

You will see the best Queen tribute show in the world. Goosebumps will run across the skin, and the heart will freeze from the first chords. Forty Queen’s world hits from the list of the band’s most popular songs: “Bohemian Rhapsody”, “Show must go”, “Radio Ga Ga”, “Somebody to Love” and many other songs will sound for you this evening.

Occasionally, it will seem to you that Freddie Mercury himself is on stage. And there is! It’s not a dream! Mark Martel is a unique phenomenon: he really not only sings like Freddy, catching his manner of behavior, vocal intonations, he also looks like Queen’s soloist. No wonder critics call Martel the “reincarnation” of Mercury. Also, the famous “Queen” drummer Roger Taylor blessed Mark to participate in the film “Bohemian Rhapsody”, where the actor Rami Malek sings with his voice.

In 2011, Martel at the Queen Extravaganza project performed a fragment of the song “Somebody To Love” – this was enough to drive the listeners and legendary Queen musicians crazy. Martela’s video collected 9 million views. Of course, Martel won the competition and went on a six-week tour. Since then, the life of a singer from Montreal has steeply turned 180 degrees.

“I didn’t think I would do such a show, and they would come up to me with the words:“ hey, did someone say that you sound like “Freddie Mercury”. When people admit this, it’s always a huge compliment, ”the musician is sure.

Performing in Kiev on June 7, 2019, Mark Martel admitted that the Kiev concert was the best in his world tour: “Thank you, Kiev! You sounded great tonight with 3800 voices!”, Freddie Mercury’s best vocal double wrote then on Instagram. It was absolutely sincere: on the Martel channel there are many videos from his other concerts, but he has not written such words to anyone before.

Even if you attend concerts once a year, this is the time that you cannot miss.