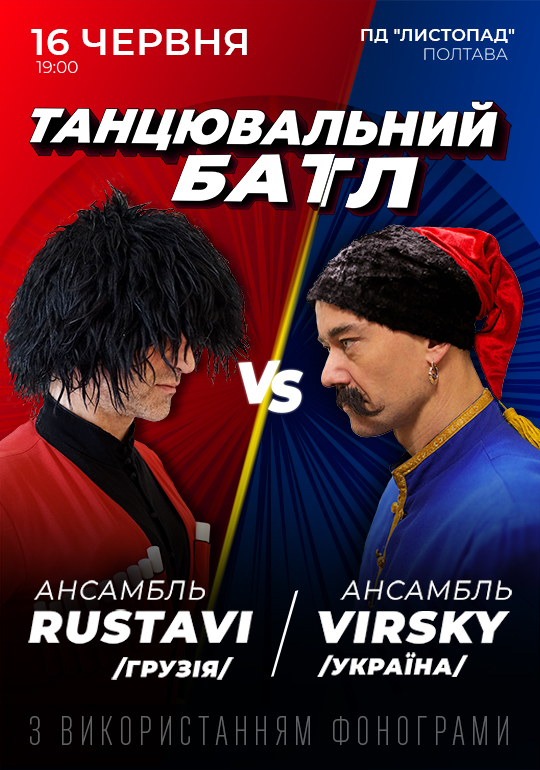 Ukraine and Georgia will meet on one stage, to show dancing mastery and colour of large countries.

Two most to the ensemble of contemporaneity – the National is Deserved the Academic ensemble of dance of Ukraine the name of Pavlo VIRSKY and State Academic ensemble of folk song and dance of Georgia ” RUSTAVI “, 50 Georgians and 50 Ukrainians, are ready to fight in a dancing duel for main prize – viewers hearts, analogues not to find that in any point the world!

Pride of Ukraine – National Academic ensemble of dance of Ukraine of the name of Pavlo VIRSKY is Deserved.

An ensemble of VIRSKY – it is 100 strongest artists that by means of dance fill with a spectator the used for setting fire Ukrainian energy. Every performance of ensemble the name of VIRSKY- it is unique combination of colour, energy and artistry. Bright and polished up motions, unsurpassed jumps, quick as lightning turns and constantly variable dynamics, and also virtuosity, mastery and originality in the serve of folk dance did him one of the best in the world!

Pride of Georgia – National Academic ensemble of folk song and dance of sunny Georgia -” RUSTAVI “.
Ensemble of “RUSTAVI”, history of that was begun yet with 1968 attained the phenomenal mastery.

“RUSTAVI” unique that, in the world it is not people or nations, that would have a repertoire similar to the Georgian technique of execution of dance of ensemble .

Each time dancers demonstrate sharp-cut to perfection choreographic mastery of serve of folk dance! For period of the existence, and it almosthalf a century – ensemble of “RUSTAVI” took an audience the mastery and blew off ovations on more than 8000 concerts in 70 countries of Europe and Asia! In 1990 “Rustavi” became a participant from the ceremonies of American Academy Rewards “Oscar”.

In 2005 in honour 60th anniversary of UNESCO, that is conducted in Tokyo, invited only to Ensemble of “Rustavi”, that they gave a concert.