Contacts
Chernyy Kvadrat. 25 minutes before and after sex 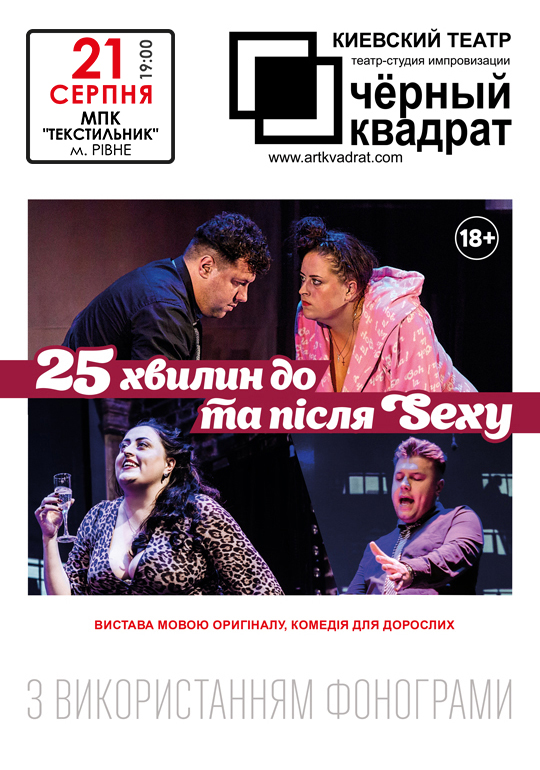 Chernyy Kvadrat. 25 minutes before and after sex
Place

The project of the “Black Square”, which is simply wildly popular. Such sold-out houses that we collect with performances dedicated to This, other theaters only dream of in the most frank and impossible dreams. So, the time has come. Talk frankly about It.

You do not have to pretend that this does not specifically concern you, and in general, you do not understand what it is about. Yes, we are talking about sex. We are having a frank conversation. Through performances about It. We give you the strongest and fastest cure for depression and bad mood. This is a super-mega-extra comedy!

Performances about what roundabout, sometimes simply inconceivable ways a couple of people (although not always just a couple) come or do not come to sex and what bizarre ways they try to get away from the consequences.

How does it happen that a man and a woman end up in the same bed? What is worth doing and what does not need to be said? And what happens by itself? What happens next? Is something changing inside of us after all this?

Stories about how you wanted, but did not work out, or happened, but not so! What and how exactly – we will tell you in great detail. Frank topics, sincere conversations. Flirty and flirt, sadness and laughter, love and hate. Minimum vulgarity, zero pornography, maximum frankness. All this twists, scrolls and crawls out in such funny and unusual stories that already …

Sex in this project is not so much a popular topic as a way to understand your relationship with the world. And, more importantly, with yourself. We are sincerely trying to help each of our viewers to understand themselves, their problems, fears, phobias, desires, excitations, and even physiology.

But still, I would like to remind you that “Before and After Sex” is, first of all, performances for adults. Hard and frank jokes are not intended for people who prefer banality in sex. The comedy is very bright and juicy – because about us, because about sex and love. And this is very rarely sad or boring. But the subtly sensitive viewer will also catch his catharsis. The performance for adults is not by passport, but by state of mind. Spectators with hypocritical views of the world, and especially without a sense of humor, are also undesirable. And lovers of black humor will get high twice! Do not categorically bring children!

Well, and finally. Everyone has his own path to joy. But if the theater helps get rid of lies, teaches trust and gives faith in love – long live performances about It!

This is a super-mega-extra comedy!