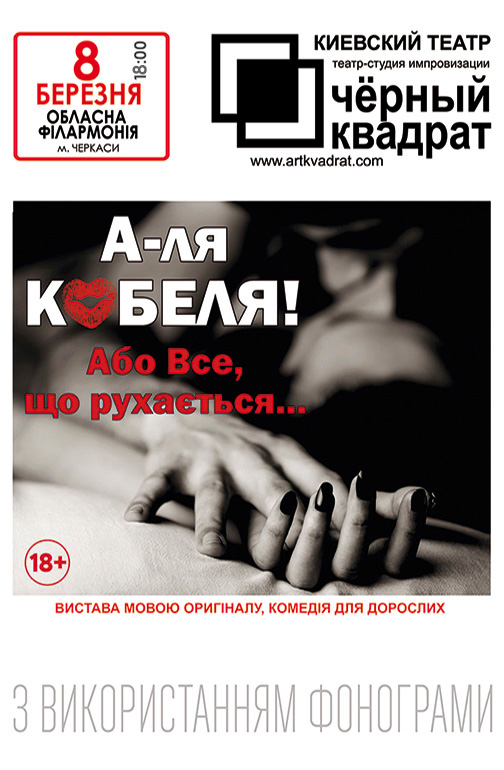 “A la Male, or … everything that moves” Kiev Theater “Black Square”

In the new theater season of 2018, Ukrainian admirers of acting are waiting for the amazing and non-trivial comedy of the Kiev Black Square Theater – “A la dog, or everything that moves.”

The comedy story of three childhood friends who have been meeting on the same day for many years and go along the same route to settle accounts with their past. But this time, the system failed: one of them did not come, and a woman was involved in this. What can help unravel all the nodes? Friends, brandy and other women. Many other women!

To drink or not to drink? To call or not to call? To love or not to love? You can help the heroes answer some of these questions if you come to a performance in which the actors do not have to hide under the names of others (Slava – Vyacheslav Nikonorov, Misha – Mikhail Spivakovsky, Seryozha – Sergey Fedorchuk).

“In fact, all the stories played in the play are mostly real. Of course, we added a little spiciness, but all this is taken from real life, ”says Sergei Fedorchuk, one of the authors and actors of the play. “Therefore, on the stage we call each other real names, so that the viewer witnesses an absolutely everyday conversation between friends with the effect of“ peeping into the keyhole ”,” Vyacheslav Nikonorov, the main character, adds.

At the “Theater Autumn 2013” ​​festival, the comedy “A la dog, or everything that moves” received four awards: “Best Actor” – Vyacheslav Nikonorov, “Queen of the Episode” – Maria Krushinskaya, “Best Author’s Script” (Nikonorov, Spivakovsky, Fedorchuk) and, of course, the “Audience Award”.

So, there are plenty of reasons to watch the performance!